I was searching for a project to build a Z80 computer which could support an operating system such as some form of DOS or perhaps CP/M. I found Spencer’s RC2014 page at:

This website is a good base for getting to know the RC2014 computer created by Spencer Owen and understanding what the concept of the RC2014 is. The RC2014 can be built with different modules which together can form a computer. Depending on what the user wants to do with the computer it can be composed of more or less modules. In the original concept the computer is completely split up into separate parts:

There are further modules which support a more complex computer, for example:

In the past I also saw some CP/M computers which had a serial port for keyboard input and screen output. Since I felt that the performance via a serial terminal would be limited I didn’t follow up on those ideas. But after further reading on Spencer’s website I found that such a serial terminal approach should not be seen as a limiting factor but rather as a useful addition which allows easy keyboard interfacing and a simple screen capability which might also be used for debugging purposes in certain cases. Especially when writing new code to support hardware additions or additional software functions. So after realising this I decided that the RC2014 is very suitable for my project. It’s fun to build a computers and expand it by building more and more modules.

I should start by mentioning that the RC2014 concept was invented by Spencer Owen. A big online community developed around it as you can find with just a little googling. CP/M is very important for the RC2014 and was inspired by modifications made by Grant Searle, a well known computer hobbyist. On his website you can also find a small CP/M computer which is a very attractive concept. It’s clear that the RC2014 fills a need for many users to get hands-on experience with a computer with a particularly easy access threshold. Also, the RC2014 has proven a particularly flexible and open concept, and is therefore very suitable for all sorts of expansions. Everything can be observed and measured directly on through-hole DIP ICs, rather than being locked up inside  large scale integrated SMD ICs. Also, it is relatively easy to load software into the RC2014 especially when using ROMWBW software and hardware. There are many contributors from whom I have gotten inspirations and schematic ideas to start from. Sometimes they made their own versions of previously existing modules with their own useful additions. In the interest of easy reading I will include their names in square brackets, and at the bottom of this blog I will try to assemble a source web page list where you can find all their respective websites. If I have forgotton to mention anyone, it’s purely unintentional and I apologize beforehand if this would be the case! Just send me a note and I will gladly credit you accordingly.

I’m doing this project with and for my daughter who is now 9 years old. In the initial phase she has already helped me a lot with the soldering work for the prototypes. Later on we will do many coding collaborations and we have plans to port and develop games on the machine(we are huge fans of SNES Super Ghouls & Ghosts which was brilliantly made by Capcom), as well as doing some interfacing coding for VGA output control(initially through ISA PC cards), music ICs(Yamaha and others) and various other additions. What form the computer will finally get is fluid for us, it will definately be a kind of evolution which will be described on this blog page. The final result will definately be a larger PCB, probably in micro-ATX size, with additional expansion slots for further experimentation and coding. In this initial phase, our additions will be small in order to safely first reproduce the concept. Later on there will be larger additions and modifications planned.

To be clear: this is a hobby and non-commercial project, and nothing may be used commercially. As you can see from the many credits the schematics and designs are by many people and may not be abused in any shape or fashion. See their respective websites about their terms and conditions of use, required reading!

We have separated the RC2014 into PCBs which group things together logically with similar or related functions, as follows: 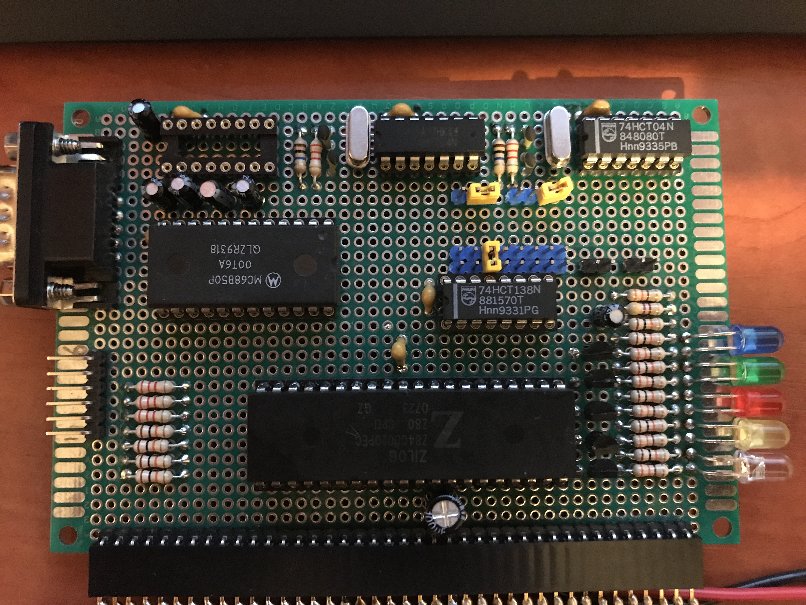 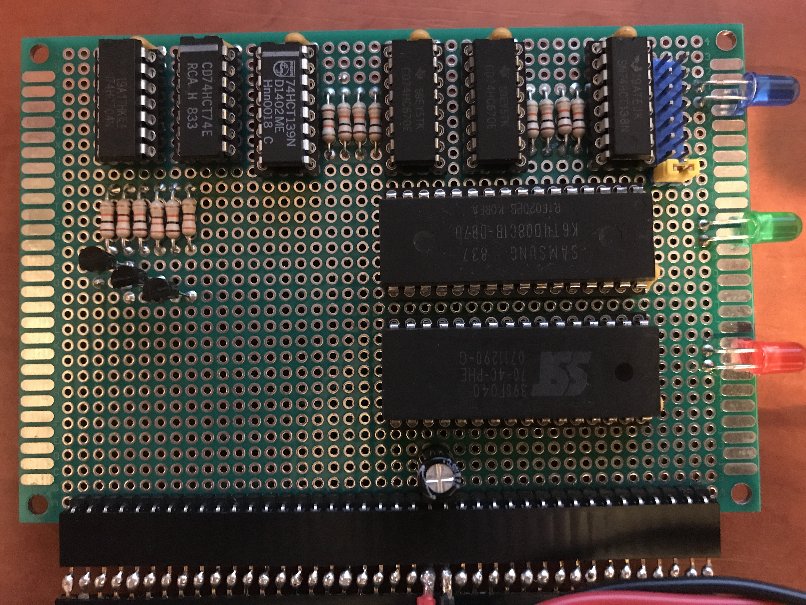 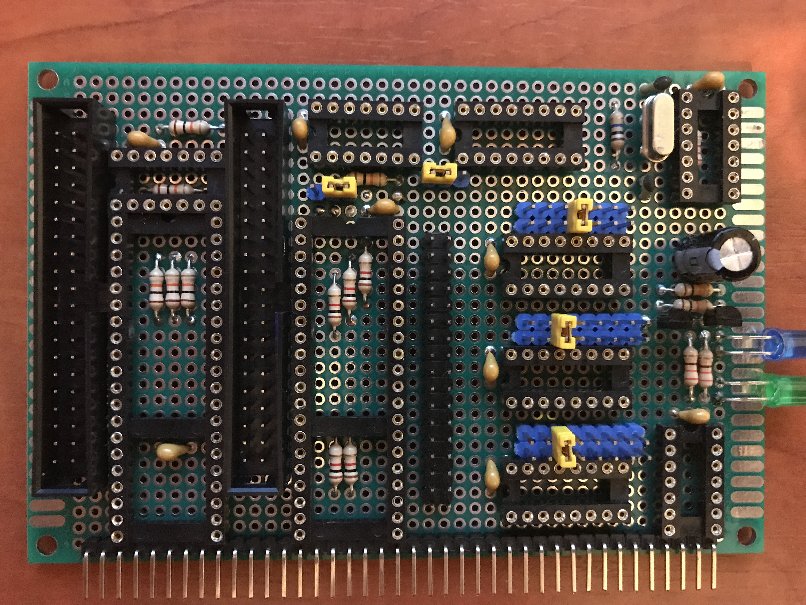 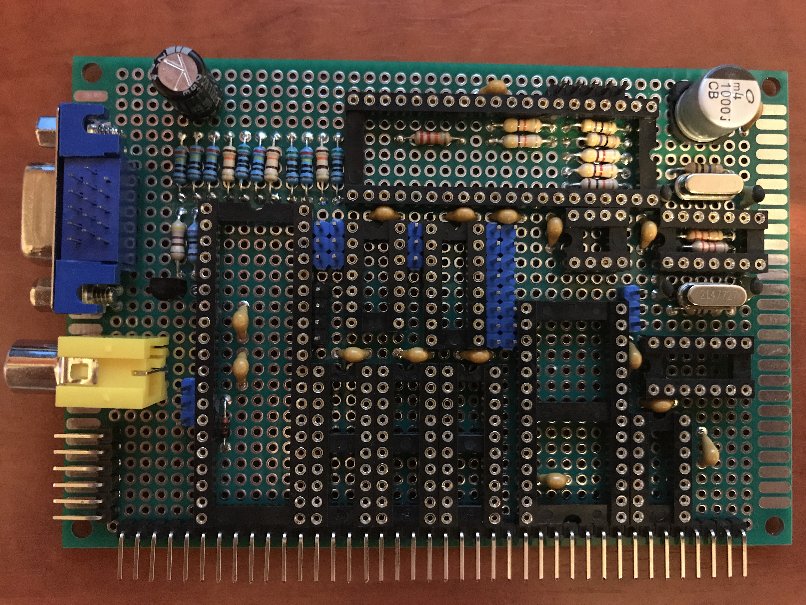 The CPU module and ROMWBW module are now verified to be working as per the schematics.

There was some problem with the MAX232 IC which was cooking, never mind, I just unplugged it for now and will debug on breadboard later or choose another level shifter. Whichever will be better and easier. Just using TTL is fine for the moment though I would prefer a solid D-connector later.

There was also some problem with the ROMWBW ROM image v3.0.1 which somehow influenced my serial console output(!), which was not working. After suspecting a software problem and switching to an earlier ROMWBW ROM image v2.9.1 the problem disappeared.(!) I will investigate further now I know the cause. It is probably related to configuration or detection of the ACIA.

During my debugging work I just “piggybacked” the CPU and ROM/RAM boards with two female pinheader strips soldered together just to eliminate any HF problems due to my stripboard “backplane”. Next I will move back to the stripboard.

The CPU board and ROM/RAM board plugged together into two pinheader strips look like this: 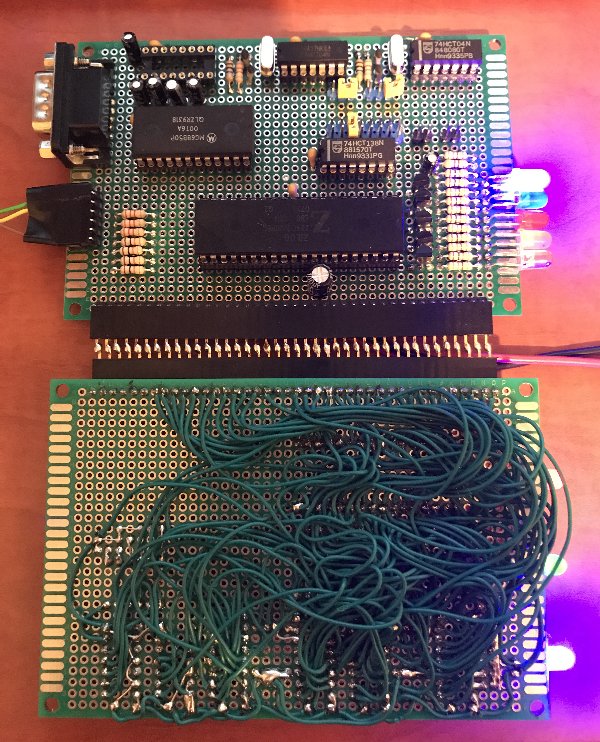 At the bottom you can see my laborious prototype wire soldering 😉

The wiring is looped a lot to be able to access all the pads even when wires are running across and around them.

This method has advantages:

After powering up only the CPU and ROM/RAM board or a similar configuration of your own together and connecting to a PC, putty serial port, 115200, none, 8, 1, none, you should be seeing the following screen appear: 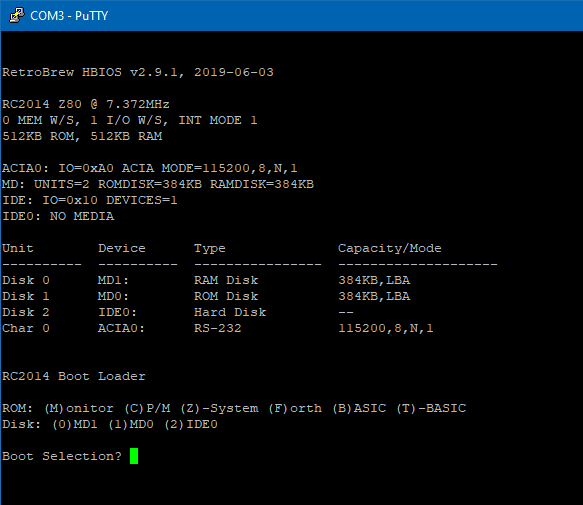 When this screen is showing it’s a good indication and proof that you have a working ROMWBW based RC2014.

With the ROMWBW LEDS it can be observed that first the ROM is active, then bankswitching becomes active and RAM is also active. During operation RAM and ROM are both showing LED activity.

All without any external storage devices and without a CF card, just from the ROM.

With this setup you can already use:

After typing the menu letter as listed, the chosen item will be immediately loaded.

-> Next phase to be published will be the drive controller interface and moving back to a backplane connection.