I have done various PCB design and building projects since the late 90's. Usually those projects were Z80 based. I started with the ZX80 and ZX97 Lite, and continued with the ZX81 Issue 4. With every new project I tried to raise the design level. I did some DIP projects and also some SMD ones after doing a lot of SMD soldering for my work.

I have always had the wish to build up a more complete system which has the capabilities similar to a classic PC. When I found some projects based on the RC2014 retrobrew Z80 system (invented by Spencer Owen), and especially after seeing the very excellent BIOS and bankswitching system project called ROMWBW, which was created and is being maintained by Wayne Warthen, I knew that I had found something special that would be a really feature rich system to build and try to expand further!

I decided to build up my own Z80 system, inspired by the ideas I have seen on various pages made by users(Karl Brokstad, Spencer Owen, Scott Baker, J.B. Langston, Marco Maccaferri) who were building RC2014 systems with their own hardware additions and modifications. I decided to design some basic circuits from KiCad schematics and logically combine some things. I spent some time testing a couple of hand wired PCBs and came to the conclusion that this system with the current expandibility would really deserve and benefit from a mainboard PCB design.

This mainboard serves to set a known functional hardware base from which I can develop both in hardware and software. The mainboard is intended as a through-hole only project, making it easier to solder. There is one exception, a 8 pin USB to UART chip, which is however purely optional and can be replaced by a small plug in PCB which plugs into the included header. Additionally, an ethernet controller is a 100pin SMD chip, which should be soldered to an adapter board, yet to be designed.

One thing which I concluded most notably after my prototype testing is that amongst the many designs supported by drivers in ROMWBW, one thing was especially missing, a fast graphics adapter which could connect to a PC monitor and display in higher resolutions. So this is definately on my wish list to develop one! I am doing the research for this plan now.

I tested with various circuits to power on and off an industry standard ATX power supply, and designed a reset circuit. These formed the basis of a mainboard design which has the following functions:

Not everything on the list is supported by software drivers yet:

Hardware design for the GPU controller PCB is pending, I am currently doing research to determine what solution would offer the best functionality. I am looking at "bare metal" programming the ARM processor on a Raspberry Pi zero board, and also I am considering an FPGA board with the ARM CPU included as a soft processor core.

The problem when looking into programming the Broadcom 2835 on the Raspberry Pi Zero is that this Broadcom chip is basically made to form the core of a mobile phone, and is much more complex than a mere ARM processor. In order to use it purely as a processor and redesignate it to completely new functions, I will need to determine the right way to do it, and how to make use of the GPIO pins in order to interface to the SRAM and handshaking latch circuits shared with the Z80, and how to output the VGA data to a screen. The big advantage of the Broadcom chip however is the very low cost price and amount of processing power and coupled memory space which can become available when using this chip.

There is a GPU slot present on the mainboard which passes the VGA signals through to the VGA connector already present in the IO Shield area.

The mainboard is ordered from a Chinese PCB manufactorer last weekend and already en route to my home, I am expecting it to clear customs in Germany at some time, after which I hope to have the first boards for testing!

I have implemented full buffering on the buses, and redesigned the IO decoders in a universal method. I still will need to test if with all these circuits the timing will be sufficient! I will update this page as soon as I have more news about this. 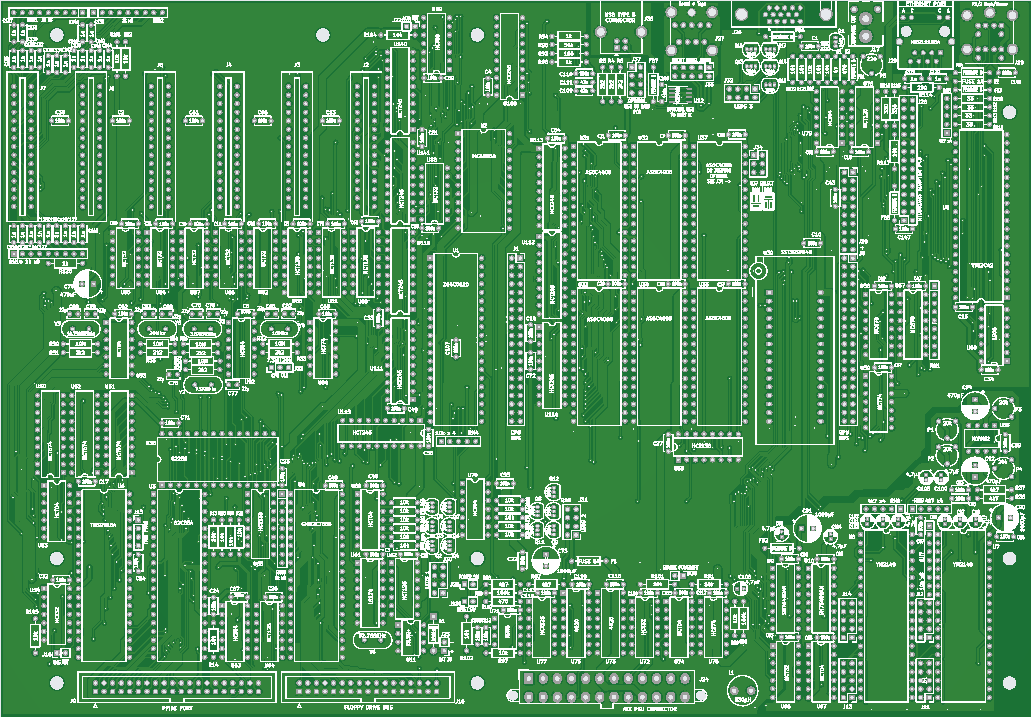 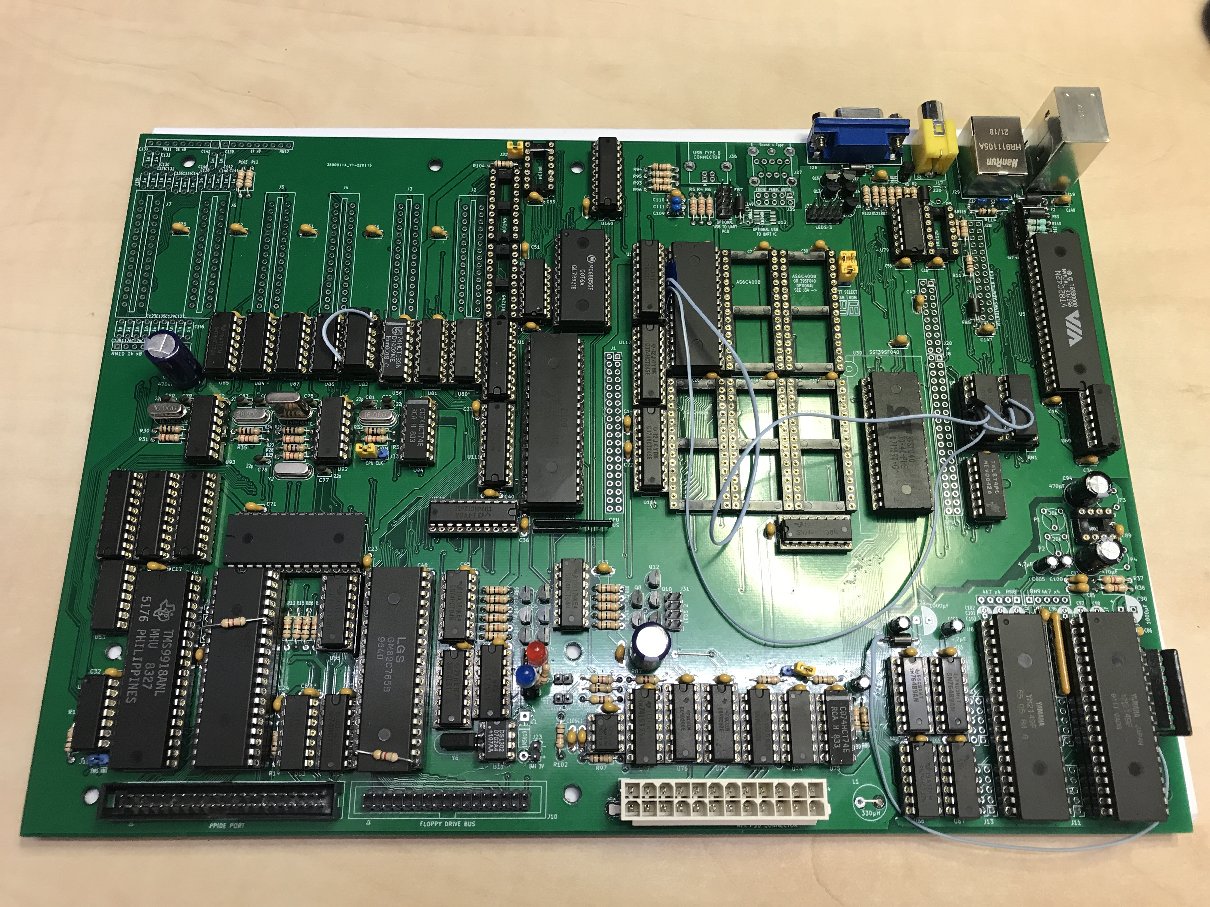 A photo of the assembled mainboard.

I have received the manufactured mainboard PCBs from JLCPCB (a big recommendation from me!) and built one up. At first I have connected all the ICs which were necessary for basic function and starting via ROMWBW HBIOS software.

During my test work I have found some issues, as I expected. I was not able to test several things on my previous hand wired setup because I would have to dramatically alter all the PCBs in such a way that it would have been much more work than manufacturing and building up this mainboard, and would have been considerably less stable and solid.

The issues I have found were:

Basically, that was it so far up until this point. Only a few small changes were needed to get things running on the mainboard PCB. I am very happy that the big change of using the bus transceivers didn't experience too many difficult problems. It was to be assumed that because it alters the timing that some issues might occur since I was not able to test anything before yet, but I am pleased to be able to separate the bus and buffer everything successfully according to plan. Also the I/O address decoders which I totally changed to a more standardized design were all working properly.

I was able to test one of the YM2149 sound chips which operates on the MSX standard ports, which works with the TUNE.COM CP/M program. It is working fine which confirms my YM port circuits to be correct. That also means that the second YM2149 chip will work fine with software that can support it.

I am waiting for some components to arrive from China, which is of course rather delayed because most people in China were celebrating the spring festival with their family. So I will do further soldering and testing as soon as further parts arrive. I desoldered some things from a few PC mainboards so I could at least test things sooner.

So what I have confirmed to function is:

After receiving further parts I will be testing

After getting the last things tested and getting all the bus signals optimized, I will move on to have the PCBs made for the RTL8019AS ethernet chip to plug into the mainboard. After that I will probably move on to the GPU design. Possibly I will design a second revision mainboard right away, just to get rid of the wired fixes and have a 100% signal optimized system which needs no modifications as a basis to continue. I may combine the RTL plug-in board and the revised mainboard in a single PCB order from JLCPCB. Further updates will follow below on this page!